I’ve been writing a lot about blood lactate testing as of late because I’ve seen such an incredible change in my athletes since we’ve started using it.  The changes are so fast and easily measured once we have a baseline to start with.  Taking a step back though, how did I get from someone who supported field testing and traditional zone formation to someone who thinks it is pretty much a waste of time? I will tell you.

Over the past three years I have been fortunate enough to work with some of the most incredible minds in coaching. If you look at my own racing career I have made some incredible strides in racing all while continuing to build a business, be a wife, step mom, and somehow still remain married (Nate get’s the most credit for that).  When my coach, Craig Upton, of Performance Labs Racing, told me to have a blood lactate test done I said yes sir. That’s what you do when a coach like Craig tells you to do something.  From my educational background I knew the implication of this testing and why he wanted the data. What I never thought about was actually using it with my own athletes.  The traditional zone calculation methods as supported by guys like Friel and Coggan were so ingrained into the different training seminars I had been to I figured, well hell, these have to work, otherwise why would they be in books? When I finally took a step back and looked at what Craig was actually evaluating in my lactate curve, I was blown away.  Why had it taken me nearly 7 years to think about doing this sooner.

What Craig initially wanted to see was how my body created the energy I needed to perform at different levels of intensity. (For a more basic explanation of why we test and how the systems work click here).  Once we had a completely scientific explanation for my limiters on the run and the bike, we knew how to manipulate them.  After spending the last two years reviewing my own progress and being mentored through reviewing countless blood lactate curves, I have started offering testing to my athletes and the public.

When someone asks me about the test or I being speak about why it is important I get one of two reactions. 1) You’re just trying to make money off of me. No Pain, No Gain. If regular field testing doesn’t work how come everyone does it? or 2) This makes total sense, I am in 100%.  Most of the time I get the second reaction because I explain what we’re looking for and how you don’t have to bash your head against a wall every damn day to get faster. Sometimes I may convert someone from the first camp – most of the time I just say “hey man, it’s your racing season.” and inside my head I think to myself “I will throw any one of my athletes in the ring with you anyday and see how you fare”.  I’m so confident in this method of testing because it WORKS if you know how to read the curve and how to apply the right training load.

Let’s take a step back and look at something…here is a graph of 2 different guys who completed a Lactate Threshold Test using blood samples. 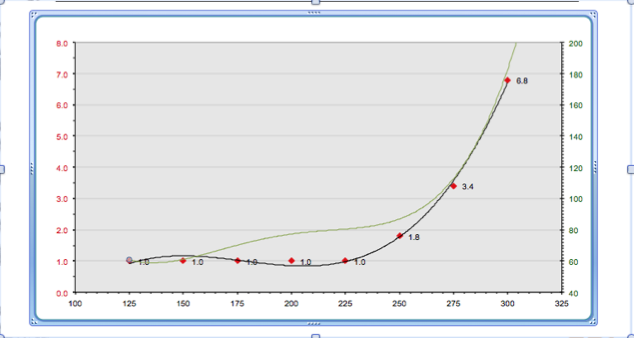 Both of these athletes have the SAME Lactate Threshold (or depending on your definition the same FTP).  If the traditional method of using JUST the Lactate Threshold Value (heart rate or power in this instance), we would apply set percentages to the number and get both athletes’ training zones. As an exercise let’s actually do that – these athletes hit their LT at about 275 Watts so we’ll use that number. Now let’s apply Allen & Coggan’s zones to this number*. Here is what we would get for BOTH athletes:

*(I put an asterisk here as there the method of testing for the Lactate / FTP number is different here than it is suggested by Coggan/Allen. In either case they are measuring the SAME thing so the numbers should be the same if not darn near close.)

Here is where things get super fascinating. First let’s look back at the same graph from above.  Do you notice the green line start to rise before the black line does? This is a sign of aerobic inefficiency. This is what I see in a lot of athletes who come to me from the ‘traditional’ testing method.  They spend a lot of time in this ‘no man’s land of endurance riding’ where they are either working too hard (in the green line’s case) or not hard enough.  Let’s make this easier…when I graph out a blood lactate test (as in the photo above) I spend some time doing some calculations and evaluating the curves.  Let’s look at what numbers I get when I do this:

What this means is that the Black Line athlete can utilize his aerobic system all the way up to 92% of his Anaerobic Threshold. This is they KEY in endurance training. Sure these guys can hang with each other for an hour but the guy with the green line has burnt through all of his carbohydrate stores and will feel awful while our hero with the black line is going to feel like he can keep going and even make a move to drop his competition.

When we compare these wattages to the zones I calculated (like most do) above you’ll notice something.  In the ‘endurance’ zone both of our guys would be riding between 152 watts and 206 watts.  For the green line athlete that line’s up okay with where his aerobic range would be based on his curve (about 150-210 watts). This DOES NOT work so well with the black line athlete. He wouldn’t be working hard enough to get any aerobic development at that range. The black line athlete needs to ride at least 225 – 255 watts for his mitochondria to be stressed to the right level for development. If the black line athlete stuck with the traditional methodology it would be like lifting a one pound weight and hoping to build strength. It isn’t going to happen!

The other thing I will say about the difference of these curves is that now, not only do we have know how these athlete create energy, we can also develop a specific training regimen to work on what each of them needs. The green line athlete needs more aerobic development.  The black line athlete needs to work on pushing his lactate threshold out further to the right.  Training these athletes should NOT look the same because they are NOT the same despite having the same threshold numbers!

THE MOST DANGEROUS EQUATION

I hope now working through some numbers and by providing a specific example with real athletes you can recognize that if you’re not seeing results it is most likely the combination of incorrect training zones, a lack of understanding of the energy systems of the body, and/or sticking to a plan that leaves you bashing your head against a wall hoping you get faster.  It’s really simple. It’s old science. It’s good science.  It works.  It doesn’t need to be more complicated than that!!!